This year's workshop was again an outstanding event with 100 researchers participating and enjoying 36 talks and 35 posters. In his concluding remarks, Michel Orrit from Leiden, stated that he was very impressed by the wide range of topics covered during the workshop ranging from experiments with sub-wavelength resolution and conjugated polymers to a blooming of new technologies (and acronyms!) as well as improvements on "old" techniques like FCS. He concluded that we live in a "very exciting time", where single molecule spectroscopy is no longer a proof of principle but a tool that can be used to address "real questions like DNA transcription and gene expression", which could not be addressed by any other technique before. 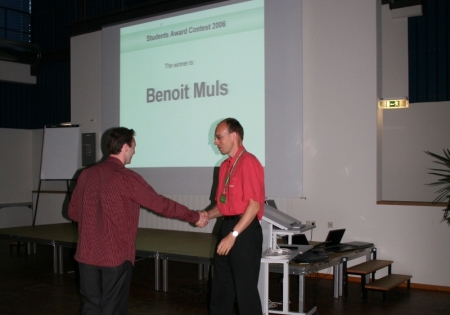 PicoQuant especially wants to encourage young scientists. As in the previous years a special prize of 750 Euro for the "Best Student Talk" was awarded by PicoQuant GmbH. The winner of this year's contest was Benoit Muls from Université catholique de Louvain in Belgium. His talk was entitled "Unravelling energy transfer pathways in conjugated polymers by defocused wide-field microscopy".

The workshop on "Single Molecule Spectroscopy and Ultra Sensitive Analysis in the Life Sciences" is an annual event since 1995. For a summary of each year's event, please select the year from the list below.