The recent years have seen a vastly increasing interest in the detection and spectroscopy of single molecules. Especially in genetics, molecular and cell biology, as well as in high-throughput screening and diagnostics, Single Molecule Detection (SMD) under biologically native conditions became an important research tool. The workshop summary is best expressed by a citation from his closing remarks of W.E. Moerner and Norman Dovichi.

W.E. Moerner pointed out: "In the area of biology we saw some amazing new results on the diffusion of single molecules in membranes with Kusumis demonstration that it is possible to obtain trajectories down to the 25 µs time scale. In addition, diffusion measurements have been applied to the study of signalling in cells for apoptosis and HRS alkvlation. I was particularly interested in seeing the experiments describing FRET upon binding of 2 proteins in a cell. With single molecules in solution, I think we have seen another set of exciting examples taking this technique to new records for the maximum number of information variables and the maximum speed of acquisition of information. With these multi-dimensional techniques there has been example after example how much more you learn by measuring more than one parameter at a time for a single molecule. ... In the case of pairs of single molecules it is exciting to see that there is now a low temperature observation of coherent coupling between two molecules. That was a long hoped for possibility, even mentioned by some of us in the early SM experiments and is now really demonstrated. Also we have heard new results concerning pairs of other chromophores with polymers in between and multiple orientations between multiple chromophores. We have seen amazing molecular machines, like those of FC or F1-ATPase, and the DNA packaging that goes on in some phages. In the area of protein folding we had a beautiful description of being able to extract some details of the landscape of protein folding from new experiments. In the area of physics there wass blinking and new dark states, and especially these dark states that Michel Orrit described, which we were all puzzled about. Small particle scattering used for detection by TIRF methods as well as surface enhancements by metals provide new avenues for detection. Of course the optics of imaging have been shown to be very important as well as complicated; almost everyone needs to take these issues into account in certain experiments. The final class of studies I want to mention are the g(1) measurements on single molecules, that indeed do show that the single emitted photons do interfere with each other. So all in all this meeting included a tremendous number of new accomplishments that I think were very exciting."

What was most striking to me at this conference were not the talks, although the talks were certainly spectacular and wonderful, but instead it was to see turnkey commercial instruments available for doing single molecule work. The availability of those turnkey instruments is going to drive the rest of that growth curve, because most users will not be laser jocks and will not be interested in tweaking an instrument. Instead, they will be interested in the science and obtaining results."

He closed his remarks with: ".. by reminding the community that we do not have to always work on the single molecule level to be useful. It is important for us to identify applications that the biologists and the rest of the community is particular interested in. That is what we are beginning to see at this conference." 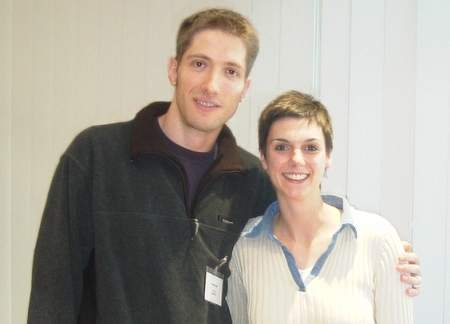 PicoQuant especially wants to encourage young scientists. As in the previous years a special prize of 750 Euro for the "Best Student Talk" was awarded by PicoQuant GmbH. The intention is to encourage oral presentation in preference over poster submissions. Again this year it proved extremely difficult for the jury to nominate the winner, since there were so many good contributions. So in the end the price was split in two between Manuel Diez (Freiburg) and Katrin Heinze (Göttingen).
The winner of the questionnaire prize draw is Mike Heilemann from University of Heidelberg. The prize is a fee-waiver for the next 9th Workshop in 2003. PicoQuant congratulates the winner and thanks all participants for the helpful suggestions and comments.