Once more in a successful series of events PicoQuant invited the top researchers working in the field of Single Molecule Spectroscopy to the 10th International Workshop on "Single Molecule Detection and Ultrasensitive Analysis in the Life Sciences" held at PicoQuant in Berlin, September 22-24, 2004.

This "anniversary" workshop was definetely outstanding, as 105 people attended and enjoyed 36 excellent talks and 37 posters. During the last decade a tremendous progress in the detection and spectroscopy of single molecules was made. Especially in genetics and bio­chemical screening and assaying, molecular and cell biology, as well as in High Throughput Screening (HTS) and diagnostics, Single Molecule Detection (SMD) under biologically native conditions has become an invaluable tool. Optical microscopic detection methods have shown the highest poten­tial in such applications. Complementary to optical detection and spectroscopy, force spectroscopy has developed into a powerful technique for gaining insight into structure and dynamics of individual molecules.

The methods of single molecule detection and spectroscopy are now well established and applied to important biological and medical problems that are inherently single molecule problems. In addition, there are many more topics with vast potential under study. Two-photon excitation, new and robust fluorophores such as quantum dots, or metalfluorophore interactions, analysis of living cells, applications in HTS, or the investigation of protein folding and biological function studies of macromolecules. Nearly all of these very diverse topics were covered during the workshop and hopefully lead to some new insights, collaborations and ideas. One of the more important goals to be adressed during the next years is to "be able to study the molecule over a longer period of time", as Richard Keller from Los Alamos National Laboratories, USA, pointed out during his concluding remarks. 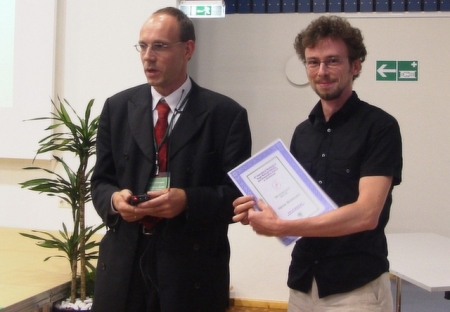 PicoQuant especially wants to encourage young scientists. As in the previous years a special prize of 750 Euro for the "Best Student Talk" was awarded by PicoQuant GmbH. The intention is to encourage oral presentation in preference over poster submissions. Again this year it proved extremely difficult for the jury to nominate the winner, since there were so many good contributions. In the end the price was awarded to Xavier Brokmann from the Laboratoire Kastler Brossel, Paris in France, with an excellent talk on "Exploring the atomic-like fluorescence properties of single CdSe nanocrystals". As this was actually his first conference on single molecule spectroscopy, he promised to be back for the 11th workshop in 2005.