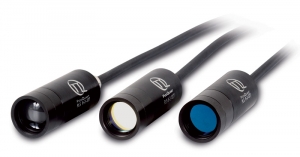 The pulsed LEDs of the PLS Series are the fastest miniature sub-nanosecond pulsed LED sources commercially available. They combine short pulse widths with high repetition rates in a compact and maintenance free set-up.

Direct emission in the ultraviolet

The LEDs of the PLS Series are the only available compact pulsed light sources that emit directly in the ultraviolet spectral range at wavelengths as short as 255 nm. Eight different LEDs with central wavelengths between 255 nm and 370 nm allow to choose a peak wavelength according to the needs of the application. Their spectral and timing characteristics are also particularly suitable for biomedical applications, e.g., for the detection of labeled substances as well as naturally fluorescent amino acids like tryptophan or tyrosine.

Pulse widths down to 600 ps

All pulsed LEDs emit picosecond pulses with a full width at half maximum (FWHM) of less than one nanosecond – at some wavelengths even pulse widths down to 600 ps are possible. The pulse width itself cannot be controlled, but does depend on the selected power level of the LED.

Spectral width down to 10 nm

The most important difference between the pulsed LEDs and pulsed diode lasers is the fact that the emission of the LEDs is divergent, not coherent, not polarized and also non-uniform in its intensity distribution. Depending on the LED used, different beam shapes can be seen ranging from near-round to elliptical. Fiber coupling into single mode or multimode optical fibers has therefore only very low efficiency – a notable exception are large area fibers such as liquid light guides. However, for short range interactions, e.g., in a compact time-resolved fluorescence lifetime spectrometer the LEDs of the PLS Series are very useful excitation sources.

All functions of the PLS Series LED heads such as repetition rate and output power are controlled and adjusted by the PDL 800-D or Sepia PDL 828 driver.

Note: An internal security circuit prevents any damage if the these LEDs (PLS 255 to PLS 340 and PLS 575) are operated above 10 MHz.

All PLS heads are supplied with an integrated lens.

The sub-nanosecond pulsed LEDs of the PLS Series are ideal excitation sources in spectrometer systems that do not require high spatial resolutions. This includes applications such as: