A variant of Fluorescence Correlation Spectroscopy (FCS), where the observation volume is scanned over the sample

Scanning Fluorescence Correlation Spectroscopy (sFCS) represents a variant of Fluorescence Correlation Spectroscopy (FCS). In both methods, the temporal fluctuation of fluorescence intensity is investigated by a correlation analysis. However, instead of recording data from a fixed spot, with scanning FCS the observation volume is moved with respect to the sample. The repeated sampling of one part of the sample ensures less photobleaching of the fluorophores as well as an increased statistical accuracy. Thus, scanning FCS facilitates the examination of the dynamic behavior as well as concentrations in live cell applications. 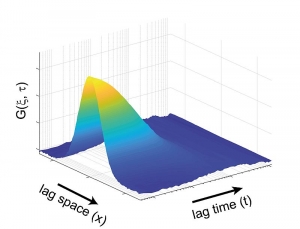 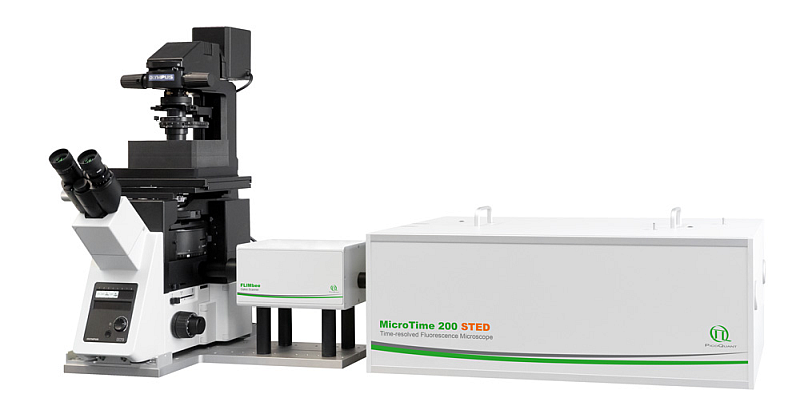 Studying fluctuations in fluorescence intensity by means of correlation analysis offers insights into the photophysics of fluorophores as well as into their diffusion behavior and absolute concentration. From this data, other important parameters can be derived, such as particle size and shape or viscosity of the environment.

In conventional Fluorescence Correlation Spectroscopy (FCS), the temporal changes in emission intensity are recorded from a small, fixed observation volume. The strength and duration of these changes are then quantified by a temporal auto-correlation. As result of this analysis, the number of emitting particles in the observation volume and their average diffusion time are quantified.

In scanning FCS (sFCS), the observation volume is scanned repeatedly in a defined manner over the sample. Thus, a spatial component is added to the temporal correlation analysis.

Thanks to its design, PicoQuant’s MicroTime 200 microscopy platform achieves outstanding single molecule sensitivity, making it ideal for all types of FCS measurements. When equipped with the FLIMbee galvo scanner, the MicroTime 200 is capable of fast linear scan motions with constant speeds. As high linearity along with high, constant velocity are key factors in analyzing sFCS data, the FLIMbee galvo scanner is ideally suited for this method.

PicoQuant aims to make this novel approach of time-resolved sFCS accessible to a wider audience and offers the following:

PicoQuant aims to make this novel approach of time-resolved sFCS accessible to a wider audience and offers the following: 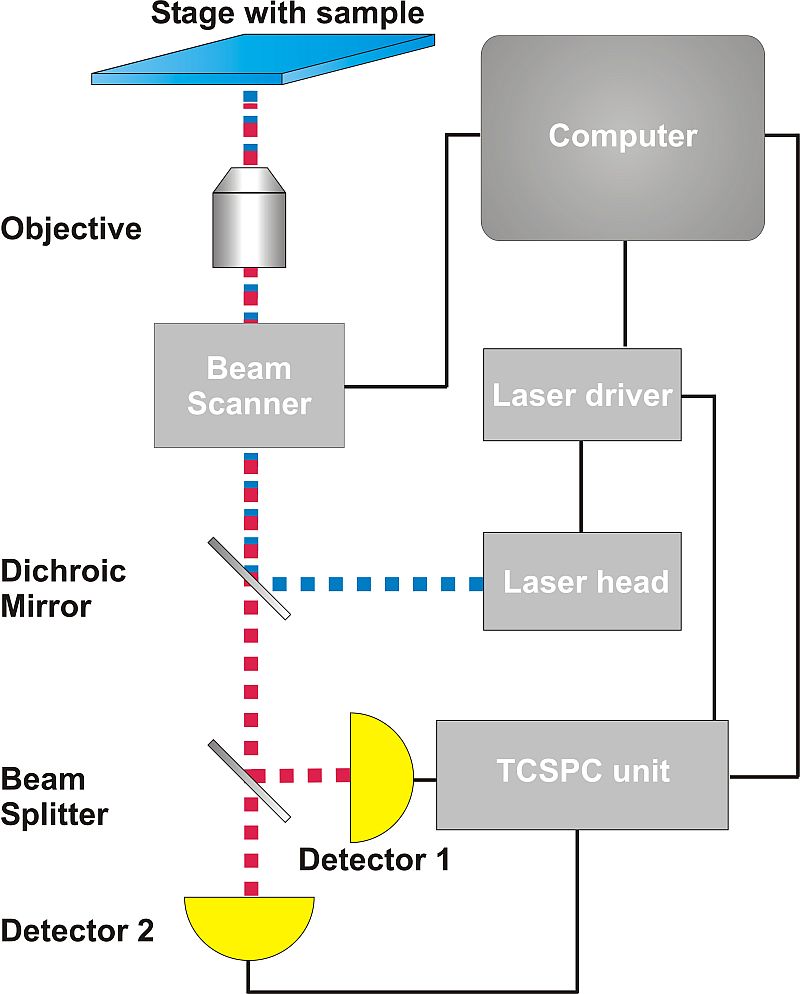 Besides the MicroTime 200 equipped with the FLIMbee add-on, PicoQuant also offers some of the necessary parts to built your own sFCS set-up from scratch:

Scanning FCS can be used for a wide variety of applications, including: 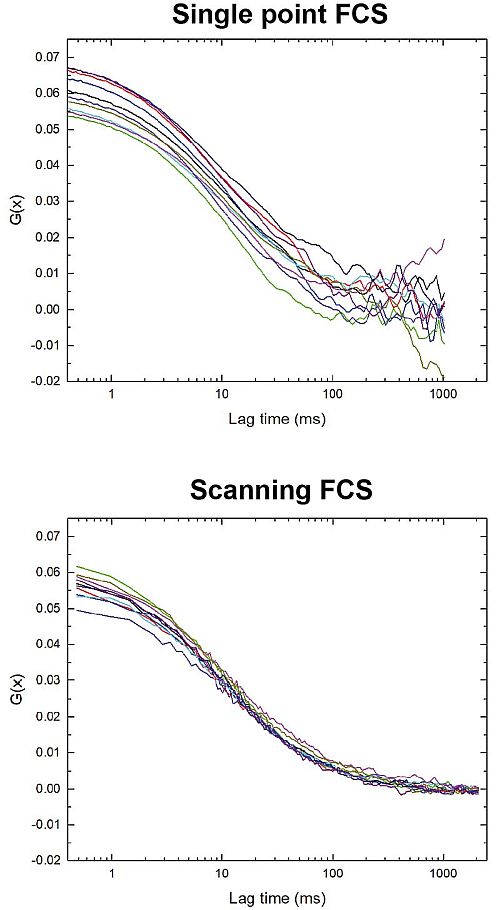 In this example, the diffusion of lipids labeled with KK114-DPPE (0.2 µg / ml) in in a supported lipid bilayer made of DOPC (1 mg / ml) was investigated both with conventional FCS and sFCS. For the conventional measurement (upper panel), data was acquired with 10 separate point measurements, each with a duration of 12 s. An average diffusion time of 10.7 +/- 1.2 ms was obtained. 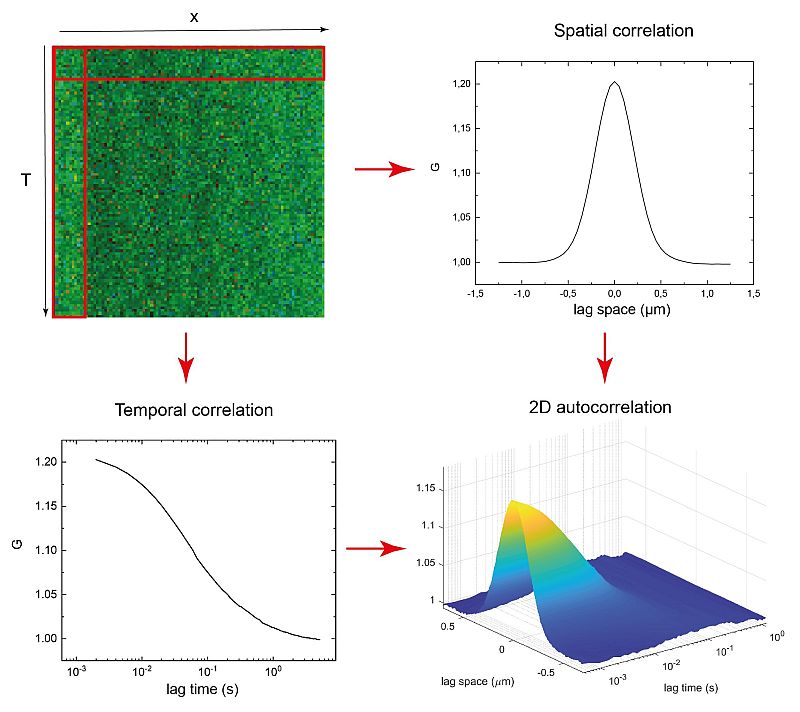 Due to its scanning nature, sFCS provides not only temporal but also long range spatial correlations. In the example shown here, a map of intensity fluctuations observed along a defined line (top left) was recorded from a DOPC (1 mg / ml) supported lipid bilayer containing DPPE proteins labeled with STAR RED l0.2 µg / ml).

From this acquired data, one can generate either spatial (top right, with lag time = 0) or temporal (bottom left, with lag space = 0) correlation curves based on the corresponding single axis. The data set is used to perform a 2D correlation, as shown in the bottom right.

The sFCS data provides a simple, quantitative and sensitive method for, e.g., studying protein-membrane interactions. Furthermore, the size of the observation area can be directly extracted from the collected data with no need for additional calibration.

PicoQuant’s sFCS approach can be combined with, for example, Stimulated Emission Depletion (STED) to perform correlation spectroscopy beyond the diffraction limit. This type of experiment is comparable to spot size variation FCS, the main difference being that the excitation volume size is controlled by the STED laser power (A). The plotted observation area sizes were extracted form the spatial correlation.

Using a variety of observation volumes beyond the diffraction limit helps in investigating diffusion heterogenity over time and space in, for example, a cell membrane. When combined with Pulsed Interleaved Excitation (PIE), it is possible to record data with confocal and STED resolution quasi-simultaneously (for more information on PIE-STED-FCS: see M. Koenig et al. Proc. SPIE 9712, 97120T (2016)). This approach helps in identifying STED based artifacts.

Since the observation spot is scanned over the sample, photobleaching and phototoxicity are significantly lower when using sFCS compared to conventional FCS. This effect can be seen when looking at the diffusion coefficient of DPPE labeled with KK114 freely diffusing in a DOPC supported lipid bilayer. In this example, PIE-STED was use to acquire FCS or sFCS data with confocal and STED resolution quasi-simultaneously.

Under confocal conditions (confocal time-gate, B), the observed diffusion times with conventional FCS and sFCS are nearly identical. While the situation changes when STED conditions are used (STED time gate, C): At high STED powers, the diffusion times detected with conventional FCS apparently are much faster. This increase is due to photobleaching of label emission. The protein is still moving at the same velocity as before but can no longer detected. This effect is strongly mitigated in the sFCS measurements.