The general methodology of time-resolved photoluminescence can be expanded by lifetime imaging of the charge carrier dynamics. This can be exploited for, e.g., determining the effect of carrier diffusion and its influence on the total lifetime measured in conjunction with intensity dependent photoluminescence lifetimes measurements. It brings an exceptional component to semiconductor analysis with respect to material and architectural substructures, spatial inhomogenities and process dependent morphology. Using TRPL imaging, charge carrier diffusion processes and the effect of localized inhomogeneities and defect sites can be identified. With this multi-dimensional approach, a versatile and powerful methodology for the analysis of semiconductor materials can be achieved.

Time-Correlated Single Photon Counting (TCSPC) is used to determine the photoluminescence lifetime. In TCSPC, one measures the time between sample excitation by a pulsed laser and the arrival of the emitted photon at the detector. TCSPC requires a defined “start”, provided by the electronics steering the laser pulse or a photodiode, and a defined “stop” signal, realized by detection with single-photon sensitive detectors (e.g. Single Photon Avalanche Diodes, SPADs). The measurement of this time delay is repeated many times to account for the statistical nature of the fluorophores emission. The delay times are sorted into a histogram that plots the occurrence of emission over time after the excitation pulse.
In order to acquire a fluorescence lifetime image, the photons have to be attributed to the different pixels, which is done by storing the absolute arrival times of the photons additionally to the relative arrival time in respect to the laser pulse. Line and frame marker signals from the scanner of the confocal microscope are additionally recorded in order to sort the time stream of photons into the different pixels.

Consequently the essential components of a TRPL imaging set-up are:

PicoQuant offers several systems that can be used for TRPL imaging

The MicroTime 100 is an idea tool for the study of time-resolved photoluminescence of solid samples such as wafers, semiconductors or solar cells. It can also be used for mapping purposes or to measure intensity dependent TRPL. The system is based on a conventional upright microscope body that permits easy access to a wide range of sample shapes and sizes. The MicroTime 100 can be supplied with either manual scanning or with a 2D piezo scanner with either µm or cm resolution..

The MicroTime 200 time-resolved fluorescence microscope system is a powerful instrument capable of Fluorecence Corelation Spectroscopy and its daughter techniques as well as TRPL Imaging / Fluorescence Lifetime Imaging (FLIM) with single molecule detection sensitivity. It contains the complete optics and electronics for recording virtually all aspects of the fluorescence dynamics of microscopic samples or femtoliter volumes. The instrument gains its exceptional sensitivity and flexibility in combination with unprecedented ease-of-use from a unique fusion of miniaturized and highly sophisticated state-of-the-art technologies. Although, these technologies enable to run an instrument of comparable complexity and power without having to spend more time on instrument maintenance than on original scientific content, the MicroTime200 remains an open platform that allows the advanced scientist to easily built upon the open character of the instrument in order to realize highly customized applications.

Confocal Laser Scanning Microscopes (LSMs) are widely used tools in cell and molecular biology, biochemistry and other related sciences. PicoQuant's LSM Upgrade Kits greatly enhance the capabilities of these microscopes by extension to time-resolved techniques, and thereby providing not only TRPL Imaging / Fluorescence Lifetime Imaging (FLIM) but also Fluorescence Correlation Spectroscopy (FCS) and a wealth of other time resolved techniques. The LSM Upgrade Kit combines PicoQuant products to a ready-to-use kit that fits your specific application on a state of the art Laser Scanning Microscope of your choice from Leica, Nikon, Olympus or Zeiss.

The following core components are needed to build a system capable of TRPL imaging measurements, which are (partly) available from PicoQuant:

Carrier diffusion observed in a GaAsP quantum well system. The central spot of the image was illuminated with a 440 nm pulsed diode laser at 40 MHz and the emission was filtered with a 735/50 nm bandpass filter. Only the detection volume was scanned over the image. The false color code in the different images of the ROI indicates that the average lifetime increases for larger radii from the point of illumination. This is shown with a complete lifetime mapping in (a) and individual ROI of increasing distance from the excitation in (b), (c) and (d). A closer look at the temporal behavior of the TRPL as shown in (e) reveals that the maximum in the transient photoluminescence shifts to later times in the transient emission for increasing distance from the point of illumination. This is the result of the longer time scales for the migration of charge carriers from the center of the image into the selected region of interest before emitting a photon from recombination. While the rise times vary, the primary decay component remains constant at around 1.1 ns. Only the center of the image shows a different behaviour, where the decay is slightly shorter at roughly 1 ns since diffusion from the point of excitation acts as an additional depleting component. 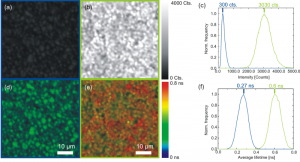 A CdTe-polycrystalline wafer surface was scanned on a confocal microscope before and after thermal activation with a chloride compound. The respective intensity images (a) and (b) as well as the lifetime images (d) and (e) before and after treatment show a significant increase in intensity and photoluminescence lifetime after activation. The statistical distribution of the intensities (c) and lifetimes (f) over the full image are given before (blue) and after (green) activation. With only the 3 ms/pixel measurement time, a distinctive change in the average lifetime can be determined as well as significant variations of the lifetime over different regions of the CdTe structure.