A qubit transmitted from one location to another

Quantum teleportation is closely related to entanglement of quantum systems. It may be defined as a process by which a qubit (the basic unit of quantum information) can be transmitted from one location to another, without the qubit actually being transmitted through space. It is useful for quantum information processing and quantum communication.  As with entanglement, it is applicable to simple and more complex quantum systems such as atoms and molecules. Recent research demonstrated quantum teleportation between atomic systems over long distances. 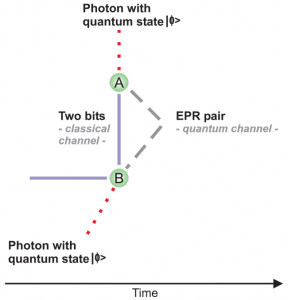 The teleportation success is then typically analysed via coincidence correlation methods. For that purpose, the photons emitted by the systems are split using, e.g., a 50 / 50 beamsplitter or a polarization splitter and send onto two single photon sensitive detectors. The output of these detectors is then fed into a time tagging unit with high temporal resolution to measure the coincidence.