Quantum entanglement is a physical phenomenon that occurs when quantum systems such as photons, electrons, atoms or molecules interact and then become separated, so that they subsequently share a common quantum mechanical state. Even when a pair of such entangled particles are far apart, they remain "connected" in the sense that a measurement on one of them instantly reveals the corresponding aspect of the quantum state of its twin partner. These "aspects" of quantum state can be position, momentum, spin, polarization, etc. While it can only be described as a superposition with indefinite value for the entangled pair, the measurement on one of the partners produces a definite value that instantly also determines the corresponding value of the other. The surprising "remote connection" between the partners and their instantaneous action "faster than light" that would seem to contradict relativity has been the reason for intense research efforts, both theoretically and experimentally. In the corresponding experiments, entanglement is proven by correlation of the measurment outcomes on the separated twins. 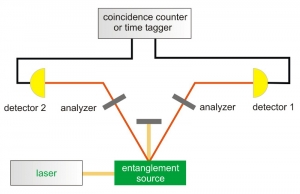 Entangled quantum systems are typically analysed via coincidence correlation methods. For that purpose, the photons emitted by the systems are split using, e.g., a 50 / 50 beamsplitter or a polarization splitter and send onto two single photon sensitive detectors. The output of these detectors is then fed into a time tagging unit with high temporal resolution that allows not only to detect coincidences in a certain time window but obtain the full second or higher oder correlations.

PicoQuant offers several instruments such as time-tagging units and single photon sensitive detectors that can be used to study photon entanglement:

The following presentations are related to quantum entanglement and were recorded at our 3rd International Symposium on "Single Photon based Quantum Technologies" in September 2020.