These application notes describe a technique or method that can be applied using PicoQuant systems or instrumentation. This includes, for example, methods such as Time-Correlated Single Photon Counting (TCSPC) or "F-techniques" such as FLIM, FRET, FCS or FLCS.

In this white paper, we demonstrate that synchronizing Time-Correlated Single Photon Counting (TCSPC) devices in a White Rabbit timing network has only a negligible effect on their time accuracy. Multiple devices from our MultiHarp product line were connected using Low Jitter White Rabbit switches from Seven Solutions the leading manufacturer of White Rabbit components. We investigate how various network topologies, optical fiber lengths, and presence of Ethernet traffic affect the time accuracy of connected MultiHarp 150 and MultiHarp 160 devices. 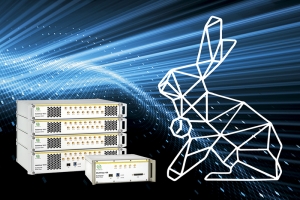 Practical considerations on experimental parameters influencing PLIM measurements are discussed in this Technical Note. PLIM is similar to Fluorescence Lifetime Imaging (FLIM), except that it images the samples phosphorescence and consequently covers time ranges up to milliseconds. Analogous to FLIM, the contrast in a PLIM image is based on the emissive lifetime of individual molecules rather than their spectra. Such characterization methods play an important role in material and life science, most notably in chemical sensing where the luminescence lifetime of a probe can be strongly influenced by its environment. 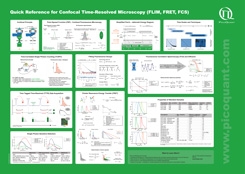 The application note introduces FRET analysis with pulsed interleaved excitation (PIE) along with Multi-Parameter Detection (MFD) schemes. PIE allows to differentiate a FRET molecule, even with a very low FRET efficiency, from a molecule with an absent or non–fluorescing acceptor. Using the additional method of MFD is also possible to identify artifacts originating from e.g. quenching or photo bleaching and separate them from the FRET species. 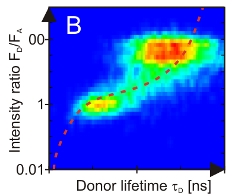 The application note provides an overview about possible applications in which Fluorescence Lifetime Imaging (FLIM) can be used to gain more insight. Applications include local environment sensing, detection of molecular interactions or conformational changes, discrimination of multiple labels or background removal, tissue characterization by autofuorescence, and characterization and quality control of new materials. 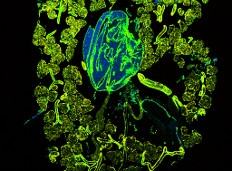 Low-intensity Fluorescence Correlation Spectroscopy (liFCS) exploits the advantages of FCS to determine accurate fluorescence quantum yield (QY) values at pico-to nanomolar sample concentrations. The method is of particular interest for scientists specialized in single-molecule spectroscopy, as it allows to characterize samples under  application relevant conditions. The determination of QYs by liFCS is easily implemented on the confocal fluorescence microscope MicroTime 200 with the SymPhoTime 64 software package. 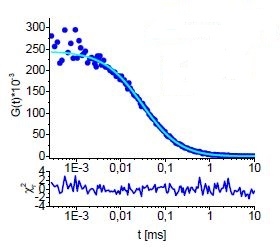 In contrast to conventional FCS two-focus FCS (2fFCS) is robust against typical artifacts thus allowing to measure absolute values of diffusion coefficients without referencing against a calibration sample with known diffusion coefficient. The application note gives a theoretical overview about 2fFCS and explains the setup and working principle of the used PicoQuant instruments. It explains how the inter-focal distance can be determined to exactly evaluate 2fFCS measurements. Based on measurement examples it further demonstrates that 2fFCS is independent of optical saturation and refractive index mismatch that negatively affect single-focus FCS measurements. 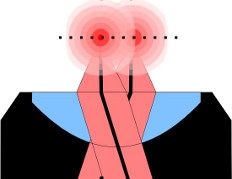 The application note summarizes precise diffusion coefficients of several reference compounds which are used to exactly calibrate size and shape of the confocal volume. In this way, absolute diffusion constant and concentration values can be obtained by FCS measurements. Furthermore, the temperature dependence of the diffusion coefficient as well as the influence of viscosity is demonstrated. 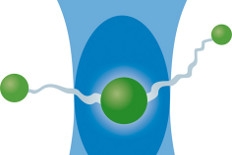