These cryogenic preamplifiers have been designed for a very low power consumption at yet sufficient amplification factors for SNSPDs with typical bias currents. They are available in two versions with either 17dB (single stage) or 35dB (dual stage) amplification. Their low power consumption of only 5mW per channel and stage are perfectly matched to applications at cryogenic temperatures. They are designed to sit on the 50K-stage of typical cryocoolers, hence further alleviating the problem of thermal load. The preamplifiers have been tested in combinations with SNSPD detectors in a BMBF funded research project. Compared to other commercially available cryogenic preamplifiers, these preamplifiers yield nearly equivalent performance, yet at much lower energy consumption and corresponding lower thermal load for the cryostat. In addition, the preamplifiers feature a passive latching protection for SNSPDs, which allows operating the SNSPDs at their optimal bias point, even at highest count rates. A bias-tee and low-pass filtered biasing-resistor (100k) is already included in the design. 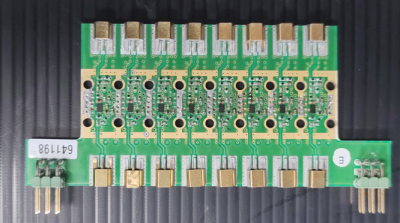 Details of the performance, also in comparison to other preamplifiers can be found in the paper „Scaling waveguide-integrated superconducting nanowire single-photon detector solutions to large numbers of independent optical channels“ from Matthias Häußler, et.al., https://arxiv.org/abs/2207.12060

The preamplifiers are flexible in design and can be fitted with different connectors (SMP, SMA,..) as well as in different housings, depending on the individual needs. Their very low power consumption also makes them ideally suited for applications requiring multi-channel amplification at cryogenic temperatures. Designs with up to 64 single stage preamplifers mounted at the 50K stage of a compact cryostat have already been realized as described in Robin Terhaar, et.al, Ultrafast quantum key distribution using fully parallelized quantum channels", https://arxiv.org/abs/2207.07345

Matching single/dual stage room temperature preamplifiers have also been developed and complete the preamplification chain. With both preamplifiers cascaded signal amplitudes suited for modern TCSPC-devices can be readily obtained. 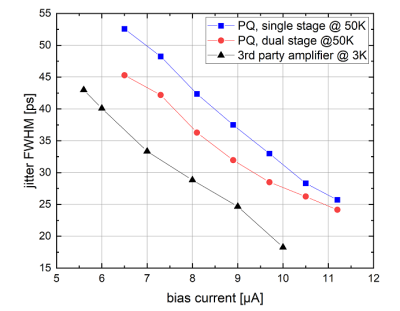 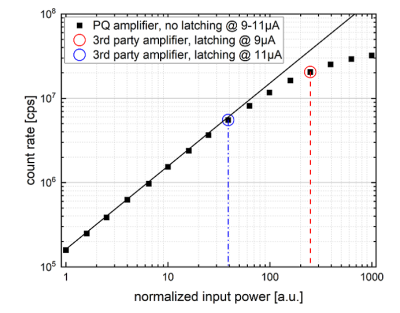 * other connectors and form factors available on request