Since 2007 PicoQuant GmbH awards a "Young Investigator Award" at the conference on "Single Molecule Spectroscopy and Superresolution Imaging" during the Biomedical Optics Symposium BiOS (part of SPIE Photonics West).

The registration window for the 2022 Young Investugator Award has expired. We would like to thank all applicants and wish them much success. Looking forward to hearing many exciting talks at the conference! 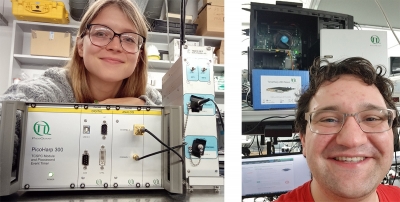 As the Photonics West was held virtually this year, our traditional Young Investigator Award could not be awarded. Alternatively, we decided to support young researchers by holding a picture contest and asked for selfies with a PicoQuant product. Congratulations to the two winners Phillip McCann (University of Tokyo, Japan) and Veronika Parfentyeva (ICFO, Spain). As a prize, both had their SPIE attendance fee refunded by PicoQuant. Veronika submitted a selfie with a PicoHarp 300, which she uses in a Time-Domain Diffuse Correlation Spectroscopy (TD-DCS) project. Phillip, who sent us a selfie with a TimeHarp 260 NANO, is currently working on a new method that encodes Raman-activated vibrations of a sample onto its emitted fluorescence intensity in the time-domain. 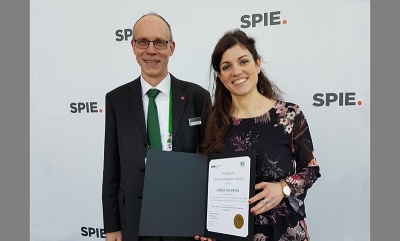 Giulia Acconcia from the Politecnico di Milano is winner of the Young Investigator Award 2020. Her presentation on "Fast and compact time-correlated single photon counting system for high-speed measurement with low distortion" was chosen best paper by the jury. Congratulations! 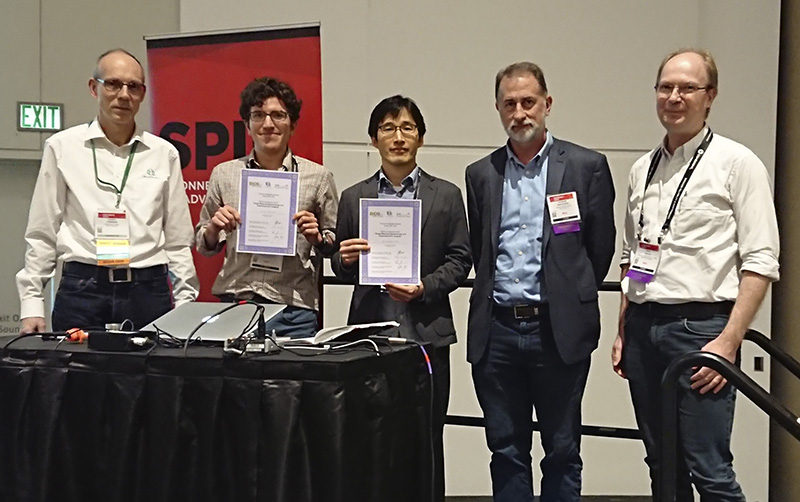 The winners of the Young Investigator Award 2019 are Hugh Wilson for his talk "Tetherless and long-term single molecule FRET in an anti-Brownian trap" and Jeongmin Kim for his talk "Oblique lightsheet STORM for tissue samples." Congratulations! 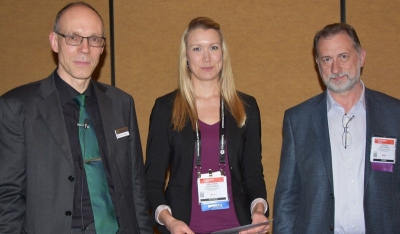 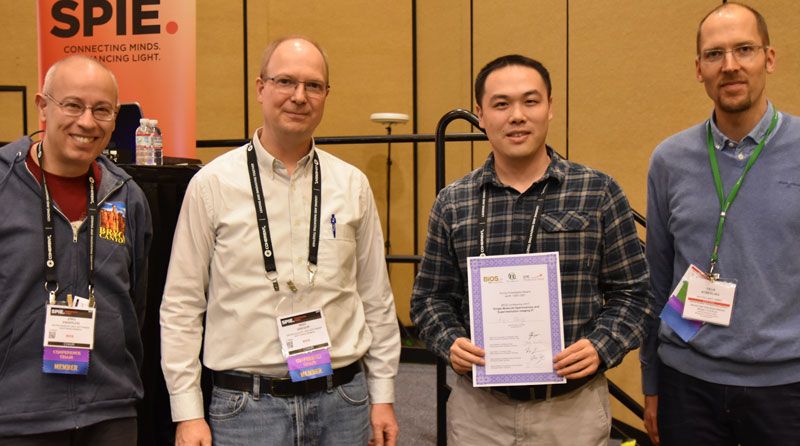 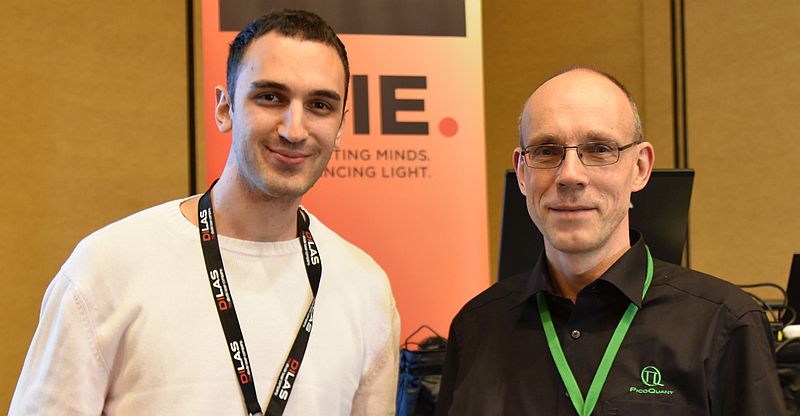 The talks presented in this years session were of such high quality that it proved extremely difficult for the jury to nominate the winner. The prize was finally awarded to Ivan Michel Antolovic from the Delft University of Technology for his presentation on “Analyzing blinking effects in super resolution localization microscopy with single-photon SPAD imagers”. 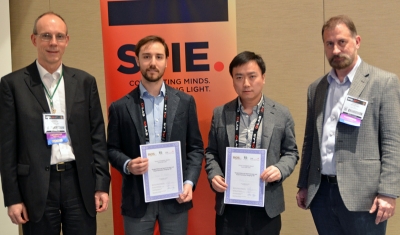 As expected from the history of this award, it was again impossible to nominate a single winner. The prize of USD 1000 was split and given to Evan Perillo from the University of Texas, Austin, USA, and to Dong Li from this year's Nobel Prize Winner Eric Betzig's lab at the Janelia Farm Research Campus, Ashburn, USA. Perillo gave a talk on "Single particle tracking through highly scattering media with multiplexed two-photon excitation", Li presented his work on "Extended resolution structured illumination imaging of dynamic process in living cells". 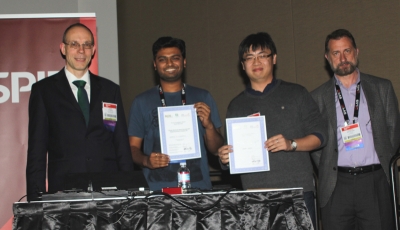 All talks presented in that session were of high quality so that it proved extremely difficult for the jury to nominate the winner. In the end the prize was split equally between Narain Karedla (Georg-August-Universität Göttingen), for his presentation about "Metal-induced energy transfer: measuring quantum yields and molecular distances" and Quan Wang (Stanford University) for "Spectroscopic and transport measurements of single molecules in solution using an electrokinetic trap". 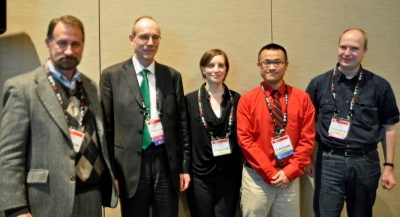 As in several previous years it was impossible to nominate a single winner and the prize was therefore split equally between Esther Wertz (University of Michigan, USA) for her presentation on "Plasmon-enhanced fluorescence intensities and rates permit super-resolution imaging of enhanced local fields" and Ying S. Hu (The Salk Institute) for "Nanoscale imaging of heterochromatic proteins in human embryonic stem cells using light sheet microscopy". 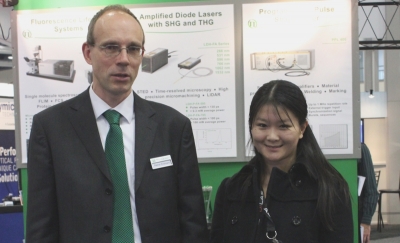 All talks presented in that session were of high quality so that it proved extremely difficult for the jury to nominate the winner. In the end the prize was awarded to Hsiaolu D. Lee from Stanford University for her presentation on "Fluorescent saxitoxins for live cell imaging of single voltage-gated sodium ion channels beyond the optical diffraction limit"

As expected, the quality of the talks presented in this years session was again very high so that it became again impossible for the jury to nominate a single winner. In the end the prize was split between Julie S. Biteen (University of Michigan) for her presentation about "Live-cell single-molecule and superresolution imaging of proteins in bacteria" and Daniel Aquino (MPI Göttingen), who spoke about "Optical switching and time-sequential coherent detection of markers through opposing lenses enables multicolor 3D-nanoscopy" 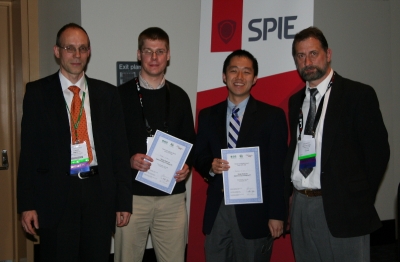 As in the previous years it was impossible to nominate a single winner and the prize was again increased to 1125 USD and split equally between Ryan A. Colyer (University of California), who presented his work on "High-throughput multispot single-molecule spectroscopy", Matthew D. Lew (Stanford University) for his poresentation about "In vivo three-dimensional superresolution fluorescence tracking using a double-helix point spread function" and Steffen J. Sahl (MPI Göttingen) for his talk about "STED nanoscopy and single molecule tracking map the nanoscale dynamics of plasma membrane lipids".

The large amount of excellent talks this year made it impossible to pick a single winner. In the end it was necessary to increase the award amount to 1125 USD and split it equally between Sigrun Henkenjohann (University of Bielefeld) fer her talk about "Photoinduced electron transfer probes for the observation of enzyme activities", Nathan P. Wells (Los Alamos National Laboratories) who spoke about "Going beyond 2D: following membrane diffusion and topography in the IgE-Fc[epsilon]RI system using 3 dimensional tracking microscopy" and Jonas Fölling (MPI Göttingen) for "Multi-parameter far-field fluorescence nanoscopy based on photoswitching single molecules". 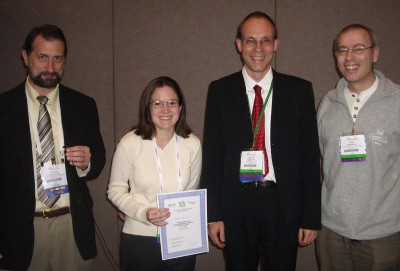 All talks presented in that session were of high quality so that it proved extremely difficult for the jury to nominate the winner. In the end the prize was awarded to Andrea M. Armani from the California Institute of Technology (CalTech) for her presentation about "Label-free detection of cytokines using optical microcavities" 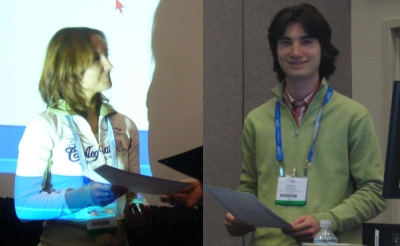 The quality of the talks presented in that session were very high so that it proved extremely difficult for the jury to nominate the winner. In the end the prize was split between H.R.C. Dietrich (TU Delft) for her talk about "A new optical method for characterizing single molecule interactions" and M.I. Rudenko (University of California/Santa Cruz) for his presentation on "Integration and characterization of SiN nanopores for single-molecule detection in liquid-core ARROW waveguides".