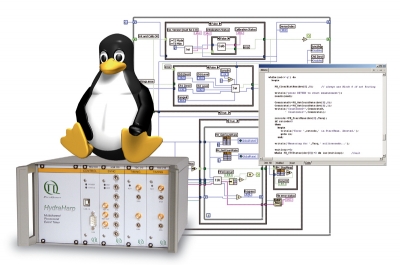 A programmer's library is now available supporting the HydraHarp 400 Time-Correlated Single Photon Counting system from PicoQuant under the GNU Linux operating system. The library is fully API compatible with the corresponding library for Windows.  It comes as a shared library supporting all features of the HydraHarp 400, including the instrument's Time-Tagged Time-Resolved (TTTR) mode, were all photons or other events are captured as precisely timed individual records. This includes four external marker inputs. These markers for synchronization with other processes can be recorded as part of the TTTR mode data stream. This provides synchronization with virtually all existing imaging devices including laser scanning microscopes (LSM). This allows to record fluorescence lifetime images with these systems at virtually any resolution and size. The HydraHarp is a multichannel device based on a modular architecture. It uses a new time digitizer with 1 picosecond resolution and a processing rate of up to 12.5 million counts per second per channel. Through the programming library, users can exploit its unique new features, notably up to four identical input channels that can operate independently, but with a common crystal time base. Therefore, not only classical TCSPC histograms for the mea­surement of fluorescence decays, but also picosecond coincidence correlations can be obtained. The latter is of great interest in single molecule spectroscopy and general quantum physics.

The high timing resolution qualifies the system for use with high resolution detectors such as Micro Channel Plate PMT (MCP-PMT). Sync rates from excitation sources can be as fast as 150 MHz but even very slow sources can be used efficiently with 'multi-stop' acquisition on the detector channel, e.g. in time of flight or OTDR applications.. The on-board  histogramming mode provides up to 65536 bins. The base resolution of 1 ps can be binned down to 2, 4, 8, .., 1024 ps in hardware, thereby providing histogram time spans up to 65 µs. Time spans in Time Tagged mode are virtually unlimited. The HydraHarp 400 system is designed as a USB 2.0 „Plug and Play“ device, allowing control and data acquisition from a regular desktop computer or notebook PC. Access to the USB interface through the library is implemented via LibUSB, so that no kernel driver is required. The new Linux version of the programmer's library is provided free of charge to all owners of the Windows version. It supports not only the current gcc compiler but also the popular LabVIEW environment as well Matlab. A rich set of sample application source code is provided with the library to help developers getting started quickly.