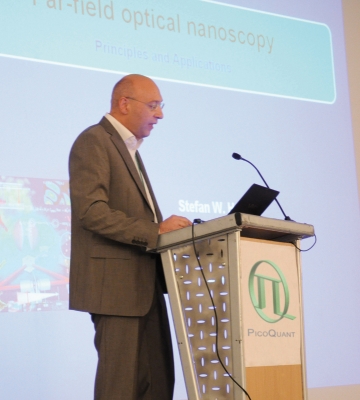 The International Workshop on "Single Molecule Spectroscopy and Ultra Sensitive Analysis in the Life Sciences" organized by PicoQuant GmbH celebrated its 15th anniversary this year. It was successfully held from September 15-18, 2009 at the WISTA Campus in Berlin-Adlershof, Germany.
The aim of this annual workshop is to provide an interdisciplinary platform for users as well as developers from Physics, Chemistry and Biology to share their experience, exchange information and report their recent findings and developments in the rapidly evolving field of ultrasensitive optical detection and microscopy down to the single-molecule level. Due to the tremendous technical developments in the recent years it has become possible to detect, identify, track, and manipulate single molecules in an ambient environment or even in a live cell. Single-molecule approaches have changed the way many problems, especially in biology, are addressed, and new knowledge derived from these approaches continues to emerge.
Today, single molecules can be detected using widefield and confocal fluorescence microscopy, scanning optical nearfield microscopy (SNOM), atomic force microscopy (AFM) or Raman scattering. Even superresolution measurements below Abbe's classical diffraction limit are possible with classical light microscopes using techniques like stimulated emission depletion microscopy (STED), photo-activated localization microscopy (PALM) or stochastic optical reconstruction microscopy (STORM).
Many of the latest results obtained with these methods where presented at the 15th anniversary workshop, which was celebrated by opening one afternoon session to the public. This “open afternoon”, which attracted more than 40 additional listeners from the local campus, included as a highlight a plenary talk given by the 2009 Otto-Hahn-Preis winner Stefan W. Hell (MPI Göttingen, Germany) about „Far-field optical nanoscopy“.

Overall, the 15th workshop was an outstanding event. It brought together the top researches in this field from all over the world. More than 170 participants enjoyed additional plenary lectures, given by Toshio Yanagida (University of Osaka, Japan) and W.E. Moerner (University of Stanford, USA) as well as 44 highly up-to-date talks. Latest results where discussed during two poster sessions with more than 70 Posters and the informal gatherings during the reception and course dinner lead to fruitful discussions about new ideas, projects and new networks. 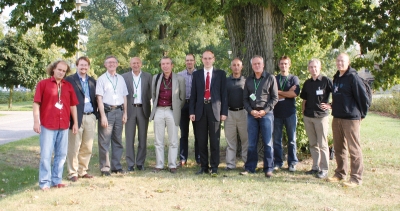 In the field of microscopy development there was again a strong emphasis on high resolution techniques (Hess, Sauer, Hell) and on combined microscopy techniques to manipulate the sample for example with an AFM or optical tweezers under optical inspection (Taekjip Ha, Jan Vogelsang, Gopal Balasubramanian). Interestingly, one of the the most prominent features of single molecules, the “fluorescence blinking”, in early days used as proof for reaching the single molecule level, then just regarded as an obstacle on the way towards bright and stable dye labels, is now again the key functionality for most optical high resolution techniques (Dertinger, Thorben, Cordes).
The workshop also showed that among more recent single molecule analysis schemes like FLCS (Hof) and Photon Antibunching (Herten) many single molecule assays and analysis procedures have been successfully transferred to regular use in commercial fluorescence microscopes (Künemuth, Krämer, Petrasek).  They are now regarded as common and standard tools to study dynamics and conformations starting for example from small proteins (Schuler, Eaton) up to general questions in structural biology (Seidel).

A good tradition of the workshop is a special award of for the best student talk. As the quality of the students talks proved again to be excellent, it was impossible to nominate only one winner. The price therefore had to be split between Sebastian van de Linde (University of Bielefeld, Germany) and Stephan Uphoff (University of Oxford, UK) who each received 500 Euros.

The workshops was closed with a brief summary given by one of the single molecule pioneers, Michel Orrit from the university of Leiden. He took special emphasis on the great variety of methods (even in a combined way) now routinely used for single molecule investigations like fluorescence, scattering and AFM. Beside the traditional applications in the life sciences we saw also outstanding research results using e.g. single nanodiamonds for magnetometers, gold and silver particles for fluorescence enhancements and nanoantennas for light harvesting. In the life sciences the applications are also becoming more and more challenging. First  observations of single molecules in a  living mouse were reported as well as new insight to very complex protein folding processes.

Encouraged by this success the 16th workshop is already announced and will take place September 15 – 17, 2010 in Berlin-Adlershof, Germany. Details will be made available as soon as possible on the workshops website at /_workshop.htm

Please find enclosed some impressions from the workshop. The pictures can be used for publication if “Pictures provided by PicoQuant GmbH” is mentioned.

Invited speakers were the following: