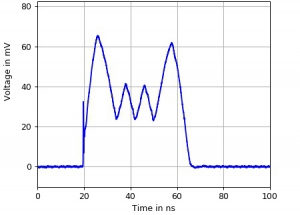 The PPL 512 is a programmable diode laser that can generate arbitrary pulse shapes with a timing resolution of 200 ps. An amplitude level with 8 bit resolution can be assigned to each time bin having a width of 200 ps. A laser signal with the defined pulse shape is the output to a single mode fiber.

By programming fast current slopes, gain switched operation can be achieved, which results in picosecond optical output pulses. Also, undesired ringing effects at fast switch-on transients can be reduced by defining specific current ramps. Moreover, saturation effects of optical amplifiers can be pre-compensated, which makes the device an ideal seeding source for fiber or solid-state amplifiers.

The plots presented here show pulse shapes generated by the PPL 512 connected to a laser diode. The optical output of the diode was measured using a combination of photodiode and digital sampling oscilloscope.

The repetition rate at which all of these pulse shapes were generated was ca. 9.8 MHz, corresponding to 512 time bins, each having a bin width of 200 ps.

The PPL 512 can also generate bursts patterns as shown in the plots below. Here a pattern of a repeating pattern of 4 bursts consisting of 2 packets of 5 narrow pulses each was generated. Each individual pulse has a temporal width of ca. 90 ps and the shortest spacing between two packets of 5 pulses was 23 ns. Between each couple of pulse packets, a temporal spacing of 66 ns was introduced. As for the pulse shapes shown above, the burst pattern can be generated at a rate of about 9.8 MHz.