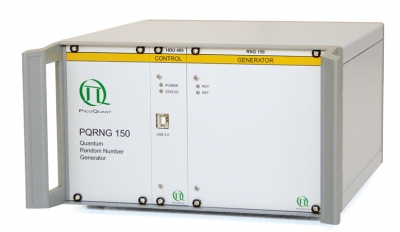 In 2010, the Nano-Optics group at the Physics Department of the Humboldt University and PicoQuant created a generator device that uses the randomness of photon arrival times to create random numbers of highest statistical quality. The generator and its associated web service have been running nearly 24/7 since then. Over these 10 years, the web service has delivered a total of 1.27 Petabytes of data to over 2000 users worldwide.

The service is publicly available at http://qrng.physik.hu-berlin.de/. The website also provides further details on the service and on the underlying principles and technology. Interestingly, service downtimes during this ten year period were only due to server maintenance such as hard disk replacements. The QRNG device itself is still running as it was 10 years ago, never needing any maintenance. We expect it to keep on running for many years to come.

Randomness is an invaluable resource in many areas of science and technology, ranging from Monte Carlo simulations to secure encryption methods. Using computer algorithms for random number generation is sufficient for some applications. However, numbers generated by algorithms are fundamentally non-random in the sense that anything generated by them is predictable. Turning to quantum physics allows for inherently unpredictable randomness due to the fundamental laws of nature. The QRNG service is a joint R&D effort of PicoQuant and the Nano-Optics group in the context of the BMBF project KEPHOSI, and partially of the DFG project (SFB787).